Note: This post originally appeared on the blog of my since-shuttered analytics firm: Axiomatic. That said, if you need some analytics work, get in touch

In the Universal Analytics, Custom Dimensions are a replacement of sorts for the older system's custom variables - they allow you to tag hits, sessions, user and the like with extra bits of data that you can then use for later segmenting and analysis.

What you can do with them

I've been digging into Custom Dimensions quite a bit lately and they've sparked some ideas like the below:

And so forth. Essentially, any time there's some extra piece of data it'd be handy to have when analyzing your Google Analytics data, you can stick it in a Custom Dimension to have it available in the GA interface just like any other first-class dimension.

How to set them up 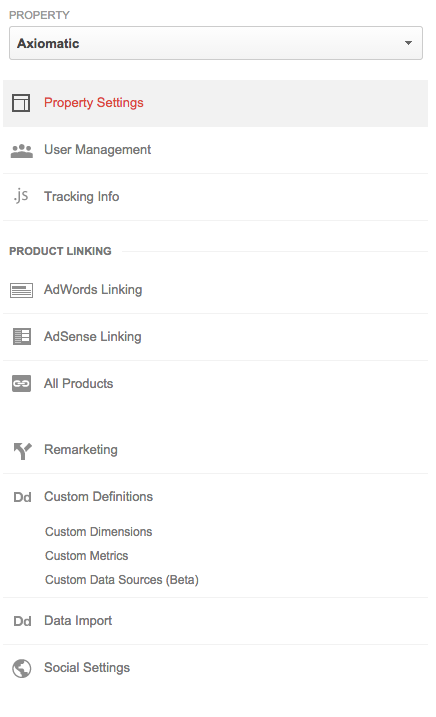 You can manage custom dimensions from the Admin area of Google Analytics. They're listed under Custom Definitions in the Property column.

The next page lists any dimensions you've already setup and includes the familiar big, red create button to make a new one. 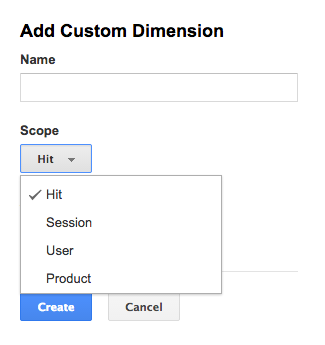 Then you'll get the short form above (I've already expanded the drop-down menu for you).

The name is completely arbitrary, but will show up in the GA interface menus and such. Make it something descriptive about what it is you're attempting to measure.

Next comes scope and you have four options:

After you have the dimension set up, you need to start sending that data to Google Analytics, naturally. And after it's created, GA will provided you with some handy-dandy code samples.

And that's pretty much it. One quick note, though: Because custom dimension work by adding extra parameters to the tracking calls, this need to be in code before you actually trigger the analytics call. Take our standard code embed below:

In order for our custom dimension to fire, we'd need to nestle it right between the ga('create'...); and ga{'send'...); lines, giving us something like the below:

If you're doing any sort of event tracking and the like, keep in mind that dimension values need to be set before you fire the associated tracking event.

Once you have data flowing in, our custom dimensions are first-class reporting citizens, available anywhere you'd like to segment or report on.

However, as far as I can tell, you're not going to find a report or dashboard for them in the primary navigation.

Instead, you'll have them available for segmenting and reporting. Below, for instance, is the segment creation screen. 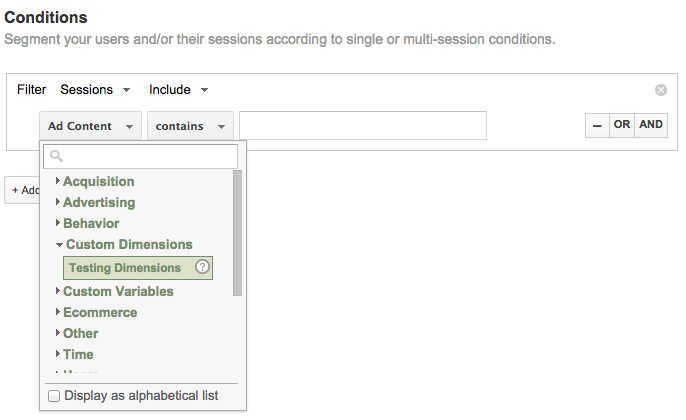 They're also available in the main interface as secondary dimensions. 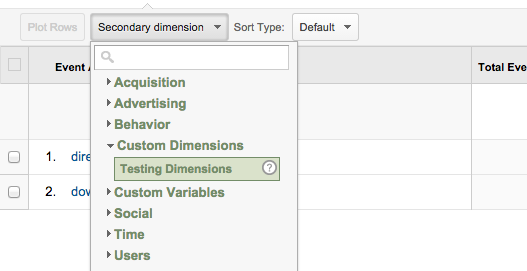 All this means is that you can use your new custom dimensions just like you would any other: You can trigger custom alerts, generate custom reports, create segments using them and ultimately export them. 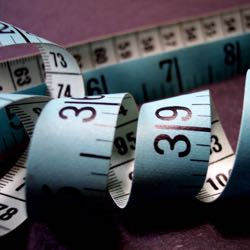